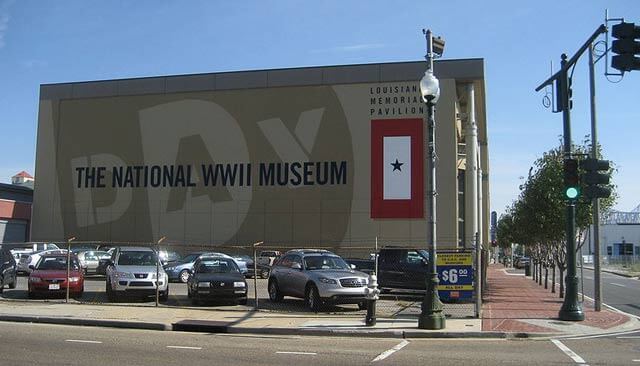 There are different types of WWII museums throughout the country. The National World War II Museum in New Orleans, however, is the official WWII Museum for America according to Congress. It isn’t just one of the best museums in New Orleans or the country but in the entire world. This museum is located at 945 Magazine Street in New Orleans LA, and you don’t want to miss it.

If you plan to stop by the Central Business District in The Big Easy, you are in the area where this museum is located. It opened in 2000, and it was originally known as The National D-Day Museum. The museum has been expanded over the years, several other buildings being constructed in the meantime. The first building was the Louisiana Memorial Pavilion.

The Liberation Pavilion is supposed to be the newest addition once it is constructed. There are four other pavilions aside from the ones mentioned, and then there is The Boeing Center, too. One of the popular interactive exhibits at the museum is The Dog Tag Experience. Each of the pavilions contains different galleries to explore, and you can imagine it’s going to take you some time to make your way around.

The Liberation Pavilion was mentioned, and it’s supposed to be ready by 2020. With as popular as the museum is, you can imagine that the expansion won’t stop there. The National World War II Museum is said to be fun for all ages. As for how long it will take you to make your way through all of the exhibits, reviews suggest about 3 hours. That’s quite a long museum visit.

Even if you don’t stop by to see it all, you can at least check it out. It is said to be a very educational experience, and there are all kinds of interesting stories you’re going to learn about. You get an in-depth look at World War II for sure. By the way, if you can’t see it all in one day, you get to purchase a pass for 2 days for just a little extra money. That will help you get to see more of what’s there waiting for you at the museum.

It’s safe to say that the museum is large and will take you a while to see. You might want to plan to get the two days to pass if you want to take your time. Make sure you catch the 4-D film when you visit the museum. The title of the film is Beyond All Boundaries. You make your way to the Solomon Victory Theater to see this film.

With a museum that large, you can imagine there are food and drink options available to you. So that you have a heads up, I wanted to tell you what those options are. One is called the Soda Shop. Another is the American Sector Restaurant and Bar. There are also special events held at this museum from time to time, two of the annual events, a quiz bowl, and a war game convention.

Nearly a million people visit the museum each year. That’s a lot of visitors, but you can expect the numbers to keep growing. I saw an image for an air raid shelter that is out front of the museum, and it is quite interesting. You will also see a Spitfire Fighter Plane and other aircraft while you’re there, including a Dauntless Dive Bomber.

While you can certainly check out the images for the place before you visit, nothing is going to be like seeing everything in person. The 4-D movie is said to be 50 minutes long, so keep that in mind, too. And get this, the movie is narrated by Tom Hanks. That is an interesting tidbit of information.

Are you going to make sure you stop by The National World War II Museum? If not, you are going to miss out. Remember, this is the official museum out of all the WWII museums in the country. That is one heck of a title and a good reason not to miss this very popular place of interest. Not only are you going to learn quite a lot, but you are going to have fun while you are there, too. Also visit Jackson Square, when you are in New Orleans. It is a national historic landmark.

Want To Stay Ahead Of The Competitors In North Bethesda